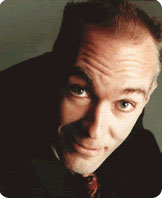 DonB! is a “professional goofball”

Don Bursell grew up in North Minneapolis, presenting his first show at 12 years old. For the next five years he performed around Minnesota with The Variety II Review. Don attended one year of college, but because of his endless energy he opted to chase his dream of circus life by working with Ringling Brothers & Barnum & Bailey Circus. Sadly, after only 6 months on the road he was forced to leave because of severe allergies and life threatening asthma complications. Soon afterward he moved to California to work as an entertainer for the Disney Corporation. In 1988 he married his beautiful wife, Debbie, and began ministry work as Circus Unique. After 17 years, he now presents family entertainment and evangelism programs as DonB! Ministries, coordinating over 250 events annually around the United States and Canada.
Don is also a 2-time National Unicycle Champion, is regularly brought in as a Convention Entertainer, and because of the quality and uniqueness of his one-man shows, he regularly receives standing ovations and high acclaim for his work.

Fun Camp is excited to have Don come and instruct and inspire us this year.  Don comes highly recommended to us by his good friend and ours, our Headliner from last year, Randy Christensen.