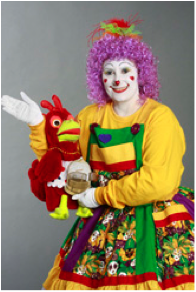 Dee Dee the Clown has been performing and delighting children of all ages for over 15 years.

She is the co-owner of Laughter Without Borders Ltd established 2005.

Below is listed just some of her accomplishments:

– Canadian Director of the World Clown Association since 2007.

– Dee Dee has trained at the World’s Largest Clown School from 2004-2009 by Ringling Brothers and other professionals from around the World.

– Dee Dee was a Guest Performer for The Ringling Brothers and Barnum and Bailey Circus in Anaheim California.

Dee Dee has won a number of awards and scholarships

Dee Dee is a member of: