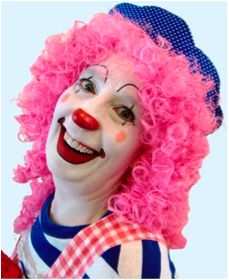 Clowning since 1980 with the Chimo Clowns of Winnipeg.

Listed below are just some of her accomplishments:

Specialized in Safety Clowning. Currently a co-founder of a not for profit corporation,
LAFS Canada Inc. (Life and Fire Safety) Presenting fire and safety shows in schools around Manitoba
Valerie and Deanna are co-Owners
Laughter Without Borders.